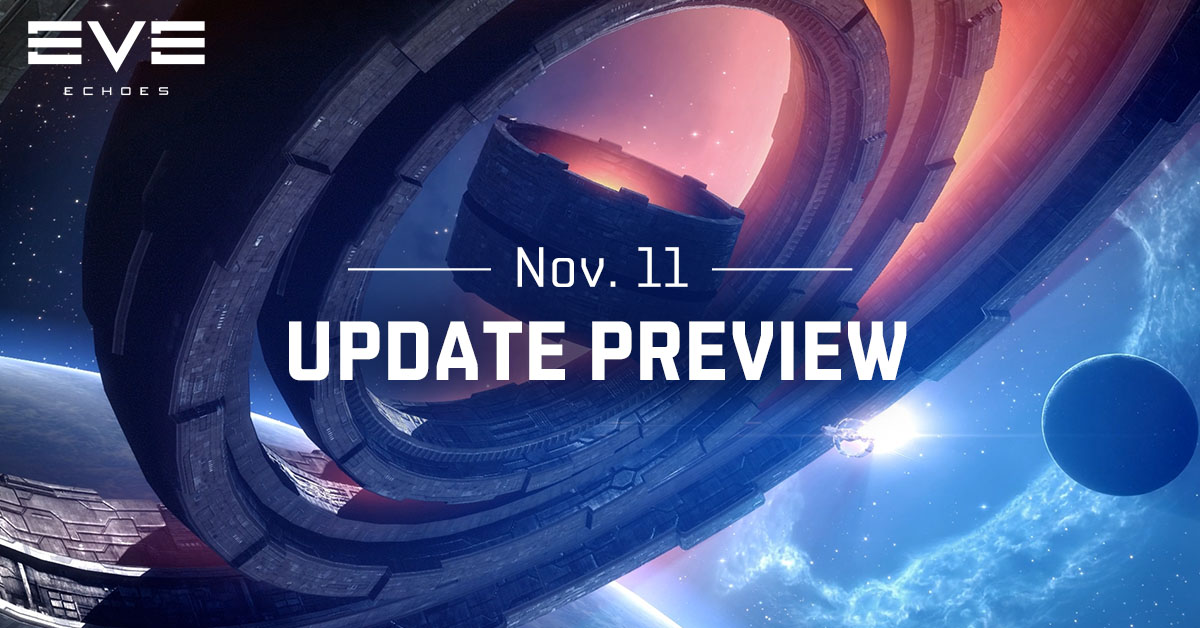 In our upcoming November 11 update, we have added additional balance changes, encounters, contracts and PvE difficulty changes. You can see below for the specific contents.
HOME NEWS FAQ
En

In our upcoming November 11 update, we have added additional balance changes, encounters, contracts and PvE difficulty changes. You can see below for the specific contents.

We also have something to say about the Skill Point reset mechanic: Because we have been burning the midnight oil to further develop other game mechanics, while also compiling the data to ensure a smooth Skill Point reset functionality, we ended up not finishing the Skill Point reset mechanic on time. Though it was mentioned in a previous AMA that this feature may not be released with the November 11 Update, we still are unhappy that we weren't able to complete it on time. We are still working on this though, and we hope you can all understand us as we continue to improve EVE Echoes for everyone!

Based on a combination of all of your great feedback and a lot of the data we've been collecting these past few months, we will be applying several balance changes. These are meant to both allow players to progress further in PvE Encounters at a better pace (to improve the experience with progression in difficulties) while creating a more realistic universe (with NPC actions and difficulty). In balancing all of this and with the new modules added, we have also further balanced ship roles. We hope this will provide a more exhilarating experience as we all go forward together in making the universe more realistic and fun for all.

Optimal Range for Energy Nosferatu and Energy Neutralizer increases with the metalevel.

There are no Weapon Disruptors or Electronic Jammers among the new modules—they have been replaced by Tracking Disruptors and Guidance Disruptors.

Ships affected by this change include:

We have added "Signal Disruption" and 2 other new skills, so several bonus skills for disruption ships have been changed.

Since the disruption modules have a fairly long range, we have canceled Optimal Range bonuses for several Frigates.

We have shortened the cooldown for Advanced Stealth ships after they decloak and lowered the Jam Strength Bonus for several battleships.

As the Warp Scrambler becomes available, specialized IC Frigates are now able to do what they were supposed to do. Thus, we removed the Stasis Webifier Range bonus from 8 IC Frigates.

Warp Scramblers are very capable, so the bonuses for lock speed and Warp Scrambler Jammer Strength were also removed.

These ships can now increase the range of Warp Disruptors and Warp Scramblers simultaneously (+3% or +5% per level).

Ships affected by this adjustment:

Fixed the issue where the 50% warp acceleration for Dramiel, Cynabal, and Machariel failed to display (the acceleration was working though).

Here in the EVE Echoes team, we place great importance on creating an immersive cosmic experience for our players, and effective NPC pirates add to this experience. Our long-term goal is to minimize the differences between NPC pirates and actual players. We want to create a universe that feels authentic, where its inhabitants have "souls," as well as a better, more challenging PvE experience—this update is a small step towards that goal.

Of course, as always, we have collected a ton of feedback from players who have played on the test server and made additional adjustments accordingly. It seems that we might have strengthened the pirates a tad too much, as some of the players are now having a significantly harder time farming them. Therefore, we're trying our best to make smaller, subtler changes to make the transition between each update as smooth as possible.

1. Use the same batch of ships and modules as players, but each enemy always used the same ship and module setup.

2. Due to technical issues, some pirates might spawn without a weapon or without some essential modules for their roles.

3. The fleet configuration for Remote-Repairing/Disruption/Electronic Warfare pirates is ineffective, resulting in 50% of the pirates providing little-to-no help in combat.

4. Due to technical issues, it was difficult to update new weapons for pirates.

5. The configuration for pirates in anomalies is fixed, resulting in repeated encounters with the same set of pirates.

1. Each pirate can use a variety of ships and weapons, randomized under specific algorithms. However, each type of pirate is assigned to a certain kind of ship to avoid an awkward situation (for example: having a massive fleet of battleships going for you in an anomaly).

2. We've updated the mechanics to allow all pirates to be able to fulfill their true potential.

3. The new pirates are now able to remote repair one another, and the repair amount has also adjusted accordingly.

4. We now have more flexibility to adjust their item drops.

Again, we implemented these adjustments to pirates in order to provide a more immersive experience for our players. We hope you enjoy these changes.

2. Rebalanced rewards for all News missions

8. Reduced the probability of listing transport missions and mining missions on the mission board.

2. Contracts can now be shared across all channels.

3. Added a shortcut for contracts that displays when selecting an item under Inventory.

5. Adjusted the value difference reminder. It is now a lot more noticeable in order to further reduce the possibility of players being scammed.